In order to truly appreciate the wonder that is the Matterhorn, it helps to learn about the people who first settled here and attempted to summit the mighty peak. The Matterhorn Museum leads patrons underground to a state­of­the­art retelling of the history of the area and the people, including the initial summit attempt that, while successful, resulted in the loss of four lives on the descent. The frayed rope from that expedition is on display, as are many artifacts from climbers and farmers alike.

Also known as Klein Matterhorn, this peak hosts the highest cable car station in Europe. From here you can ascend the mighty Breithorn, or access the ski pistes to Italy. In the summer, race through the area on one of the many mountain bike paths. The views from the observation deck are heart­stopping, with Mont Blanc and the Matterhorn on full display. When you need to replenish, head to Restaurant Matterhorn Glacier Paradise, which boasts itself as a Minergie­P­certified zero­energy establishment. The panoramic windows that frame the view of the chiseled peaks is the cherry on top of this sweet mountain spot.

This rocky ridge boasts breathtaking views of its namesake glacier, as well as some of the highest peaks in the Alps. In total, 29 peaks over 4,000m (13,123ft) surround Gornergrat, making it a popular destination for hikers and skiers. At the summit of the ridge lies the terminus of the Gornergrat railway, the highest open­air railway in Europe, which connects the ridge to Zermatt below. The summit is also the site of the Kulmhotel Gornergrat, whose amenities include an astronomical observatory. 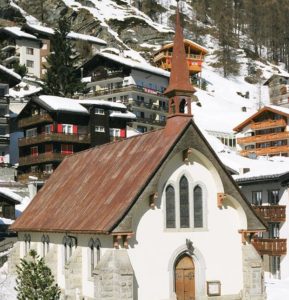 This church represents the so­called golden age of alpinism, when mountain­climbing was all the rage in Western Europe. Most of the mountaineers came in from England, but the only English­speaking church services at the time were held in hotels. Consensus began to form that there ought to be a proper Anglican church built. The disastrous conclusion to the first summit of the Matterhorn, wherein four men lost their lives, finalized the decision. These days, the church still holds English services, but even if you’re not looking to attend, the church’s historical significance makes it a worthwhile stop.

If you’re impatient to hit the ski slopes during your stay, you might consider setting up camp at Iglu­Dorf. This igloo village is located in the mountains above Zermatt, in some of the best ski country the region has to offer, which means it can get crowded. However, a stay at Iglu­Dorf means beating the crowds and hitting the slopes before the lift even starts running. Rooms are lined with fur rugs and dotted with candles, creating pools of golden light that illuminate the fanciful patterns and shapes carved into the snow. 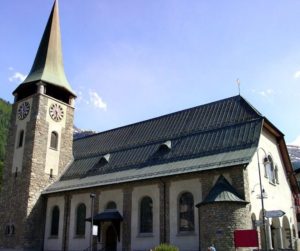 Although the original parish was constructed in 1285, the building you see today was built in the 1920s. The clock tower reaches elegantly toward the sky, as if doing its best impression of the Matterhorn behind it. Services here are performed in many languages, and even sung on certain Sundays. Classical music lovers can attend the Zermatt Festival every September. Additionally, the square upon which the church sits, called the Kirchplatz, is home to the annual Folklore Festival held in August.

The Alps are majestic and beautiful, but they can also be quite deadly. Everyone here remembers the tale of the first attempt to summit the Matterhorn in 1865, in which four of the seven climbers were lost, but over the years hundreds of climbers have lost their lives on these peaks. The Mountaineers’ Cemetery stands as a reminder to respect the power of the mountains, and to honor those who lost their lives in pursuit of the sky.

This family retreat destination can be reached by funicular all year round. Nestled in the mountains, its view of the Matterhorn is stunning, and may be best enjoyed on the sunny terrace of the self­serve restaurant. In the summer, Leisee Lake beckons families with alpine swimming, barbeque pits, and playgrounds for thekids. There is also a marmot­viewing station, complete with a themed trail. In the winter, of course, skiing and snowboarding are the order of the day.

The Village Tour can really be whatever you want it to be. Take a cursory glance at the town in a couple hours, or spend half a day touring its many historical and unbelievably scenic attractions. The ancient ways of the old time mountain farmers are still prevalent around here; most notably, cars are prohibited, in favor of horse­drawn carriages. When not traveling by carriage, Zermatt is the perfect town for strolling. Walk down the Bahnhofstrasse, the main shopping street. Explore Kirchplatz, the church square with the majestic Matterhorn in the background. No matter how you choose to tour Zermatt, it will always be breathtaking.

This is the highest peak in the area, and yet the summit is still accessible by steam train and cable car. As with just about anywhere in the Alps, the views are spectacular, but Rothorn has the added eye candy of Lake Brienz twinkling below. Take a night in the mountain guesthouse, and enjoy a sumptuous meal at the Restaurant Rothorn, where the mountain views become extra spectacular at dusk and dawn.