Roughly 200 miles south of Venice you will find Rimini nestled on the East coast of Italy and banked by the Adriatic Sea. Romans bring up a period of history that many people long to catch a glimpse of. Luckily, there are still areas where historical monuments and architecture stand as a testament to this historical period. Rimini is one such place. With more than nine miles of beautiful sandy beaches, thousands of restaurants, bars, discos and hotels, Rimini is one of the most popular destination spots in Italy.

To enjoy some of the best nature has to offer in Rimini it is essential to spend time on the many beaches of the Adriatic Sea. With nine miles of beachfront, you are sure to find a nice, sunny spot. Different areas, such as Beach 33 allows for the company of your dog and offers many umbrella areas for a break from the sun. All sized dogs are welcome, as long as on leash and picked up after. There is also a fenced in playground where children can play safely. To get a true taste of Rimini a beach visit is an absolute must.

Since 1809 this has been the Cathedral of the diocese and a world example of Renaissance architecture. Many consider it the most aesthetically pleasing of all the Rimini monuments. Built by Leon Battista Alberti to be a casket of precious marble around St. Francis’ gothic church, it is an architectural wonder. The work was contracted by Sigismondo Malatesta in 1446 and finished in 1460, though left uncompleted. It has been completely restored, housing the Giotto Crucifixion, Piero Della Francesca’s fresco and many sculptures.

The history of the Tiberius Bridge is rich and dates back to Roman times. It is also called Ponte di Tiberio and Ponte d’Agusto because of the Romans who oversaw its construction. It was started during Augustus’ reign of 14 A.D. and finished under Tiberius’s reign, his successor, during 21 A.D. It is located on the north end of Corso d’Augusto, the main street. The bridge is an architectural marvel, constructed of Istrian Limestone and covering more than 70 meters with its five unmistakable arches. The bridge is Doric in style and was first built for crossing the Marecchia River. This was diverted before WWII and now it rests over the Rimini Marina. The Tiberius Bridge has withstood the test of time, as well as several attempts to destroy it, particularly by the Germans during WWII, and is still open to travel today.

If you want a slice of history, visit the oldest Roman triumphal archway still standing. It’s iconic and highlights how important the area was to the Romans. Dedicated to Gaius Julius Caesar Augustus and erected in 27 B.C. the arch marks the start of the Pax Romana, or a time of peace and prosperity for Romans. The arch noted the end of the Via Flaminia, the roman road, and the start of the city Rimini, then called Ariminum.

Tucked in behind the Teatro Galli and Piazza Cavour, is the medieval Castel Sismondo also called Malatesta and sometimes Sigismond Castle. Began by Sigismondo Malatesta in the year 1437 it was finished in 1446. The castle served as a defensive structure but also as a source of prestige for Sigismondo Malatesta and his successors. The design is very picturesque with ceramic and stone inserts as well as pointed arches and long passages. When Malatesta passed in 1468 the castle was full of books, documents, amazing furniture, murals, fabrics, weapons, banners and jewelry. These days it is home to displays, exhibitions, conferences and guided tours. You can also visit the local market held at the foot of the castle on Wednesdays and Saturdays.

Housed in the former Jesuit College from the 18th century, the Town Museum is one of the best places to get the inside scoop on the history of Ariminum (what Rimini was called during Roman times). Here you will find many objects that archaeologists have discovered during their digs illuminating this historic period. You will also find many works from the 14-19C such as a crucifix from the area school, wood paintings, Giovanni Bellini’s Pieta and so much more. With over 1,500 displayed artifacts, the museum is a must see as it illustrates an amazing period in Roman history where sea and land meet.

Are you looking to get active with the kids? If they have spent too much time taking in history it’s time to visit Aquafan Riccione, the Rimini waterpark. The park is open from 10:00 am to 6:30 pm every day from June 7th thru September 14th and they allow you to select a day to come back for free. Built in 1987, the park has three areas that are made with young children entirely in mind, attracting local families and visitors alike. For small children, the Elephant Pool is only 50 cm deep, with three small slides coming down from a pink elephant. The trunk sprays water for more fun. Older children can enjoy Focus Junior Beach, with much longer slides and a slightly deeper pool. Teenagers and adults need to try the high slides that are 200 meters long or the Kamikaze water slide that reaches a speed of 65 km/h. This is a park that will cool you off and provide fun for everyone.

Erected in the 13th century by St. Augustine’s hermits and frescoed by Giovanni in the 14th century, this church is truly a masterpiece. The apse frescoes were rediscovered after an earthquake in 1916 and can now be seen. It has a gothic interior that was remodeled in the 17th century. It suffered much damage during WWII but has been restored. As rich in history as it is in beauty, the Saint-Augustin Church is a definite place to visit. 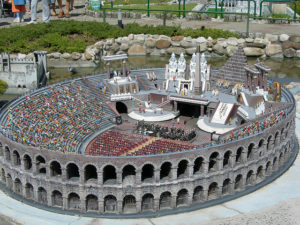 Take a break from the large, historical architecture and walk in the land of miniatures at Italia in miniatura. Not like your average theme park, you can visit all of Europe or just Italy in small scale. If you don’t have time to see all the attractions you want to, stop here and visit all the historical buildings on a small scale. You’ll also have a chance to shop for unique souvenirs and enjoy tasty food while here.

Another place to go with the family and cut lose from the history lessons is the Fiabilandia. For the youngest in the family there are carousels, play grounds, a magic village and a valley of gnomes. There is also lots of indoor fun with inflatable houses and jungle gyms for birthday parties. Additionally, there are many nature exhibits for the entire family to enjoy. More family fun includes the Hill of Boo-hoo, Labyrinth of Fu-Ming, Apache Village, Gold Mine, Bay of Peter Pan, Castle Merlin, SpaceMouse and much more. You can also enjoy Captain Hook, Where Dreams are Wishes and Buffalo Bill shows.