Any proper visit to Prague begins at Prague Castle, the official seat and residence of the President of the Czech Republic. The Guinness Book of World Records cites this castle as the largest ancient castle in the world, and with the first building taking place in 870, it is certainly ancient. The views of the city from the castle walls are unparalleled, and the plurality of cathedrals and chapels in the compound make for hours of exploration. Watch the changing of the guard every day at 12pm, and then take in the permanent exhibit of The Story Of Prague Castle, where the castle’s centuries of history come to life before your eyes.

Spanning the Vltava River, the Charles Bridge is one of Prague’s most famous destinations, and with good reason. Built in 1357, it was the only way to cross the river until the 19th century. The bridge is guarded by three bridge towers; the Old Town bridge tower is thought to be one of the most astonishing examples of Gothic architecture in the world. As you cross the bridge, peruse the wares of various merchants while enjoying music performed by street musicians. You will also see statues of saints, erected between 1683­1714, tipping a hat to Prague’s religious past.

Stand at the center of Old Town Square and you will notice that you are surrounded on all sides by gorgeous Gothic towers, whimsical pastel row houses, statues, and delicious food stands. Lose yourself gazing at the elegant Týn Church, or catch the hourly display of moving figures around the world­famous Astronomical Clock; observe the statue of the martyr Jan Hus, located in the center of the square; and stop by the trdelník stand for a warm and uniquely delicious pastry experience.

If you find yourself tiring of the Gothic and Baroque architecture that dominates the town, make your way to this fanciful building designed by Frank Gehry and Vlado Milunić in 1992. Because its form suggests two dancers, the building’s original nickname was Fred & Ginger, for Fred Astaire and Ginger Rogers. The building was controversial when it was designed because it was thought that the hyper­modern style would clash with Prague’s centuries­old architectural aesthetic. However, it has enjoyed more and more popularity over the years, and is now even featured on the 2,000 Kč coin.

The other of Prague’s two main squares, Wenceslas Square is technically a boulevard. The National Museum and Opera House sit on the upper end, along with a statue of Saint Wenceslas for whom the square is named. This boulevard was originally the Prague Horse Market and was renamed and repurposed in the 19th century. Wenceslas Square is situated in New Town, conveniently located near most of Prague’s most famous tourist attractions, and is lined with restaurants and shops to visit as you make your way around the area.

In the shadow of the massive Prague Castle compound, nestled in Lesser Town, sits St. Nicholas Church, widely agreed to be one of the finest examples of Baroque architecture in the city. Inside the mighty dome of the basilica resides a pipe organ comprised of 4,000 pipes; the largest pipe is over 6m (19.6 ft) in length. This organ was played by none other than Wolfgang Amadeus Mozart during his stay in Prague in 1787. 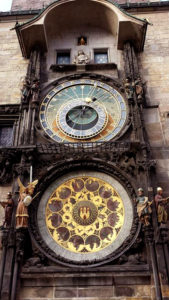 Functioning for over 600 years, the Astronomical Clock is a marvel of medieval technology. Its various dials convey the time, the day, the month, and the position of the sun and the moon. Make sure to catch it at the top of the hour, when the Walk of the Apostles brings to life all the figures placed around the clock. Death, a skeleton, rings a bell, and a Turk nods his head while Vanity regards himself in a mirror. The performance culminates with the crowing of a golden rooster and the ringing of the tower’s giant bell.

Presiding over the upper end of Wenceslas Square, the National Museum is a neo­renaissance­style jewel. Marble arches and columns beckon you into the classic main hall, where your journey begins. A trip to the museum will take you on a cultural and scientific voyage through the rich history of the Czech Republic. Learn about regional archaeology, prehistory, ethnography, and take in captivating temporary exhibits that will give you invaluable insight into the Czech people and their proud heritage.

Begun in the 14th century, St. Vitus Cathedral took nearly 600 years to complete, and was finally declared finished in 1929. Behold the ornate vaulted ceilings, which signalled a sea change in Gothic design. Within the Cathedral, you can sneak a peek at St. Wenceslas Chapel, wherein lie holy relics and the Czech crown jewels (which are only on display to the public once every eight years or so). Other relics and remnants of famous Bohemian nobility lie entombed under this magnificent structure. For a remarkable taste of Czech history, it doesn’t get much better than St. Vitus. 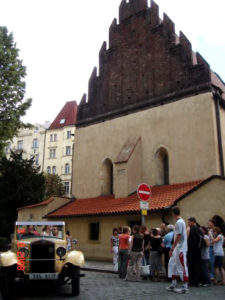 According to legend, the stones used to build this synagogue were delivered from the Temple of Jerusalem by angels, on the condition that, when the Messiah appeared and the Jerusalem temple needed to be rebuilt, the stones would be returned. This synagogue has been operational since 1270, earning it the distinction of being the oldest functioning synagogue in Europe. Its wooden, peaked roof and interior vaults are stunning examples of early Gothic architecture. The synagogue can be found just north of Old Town Square and just south of the Vltava River.